The World of Trade Shows After COVID

Imagine strolling through endlessly interesting rows of booths, where suppliers in your industry show you what they offer, and talk with you personally about sales and services, professional connections, and a host of other potential benefits. If you’ve ever attended or participated in a trade show, you know the experience. 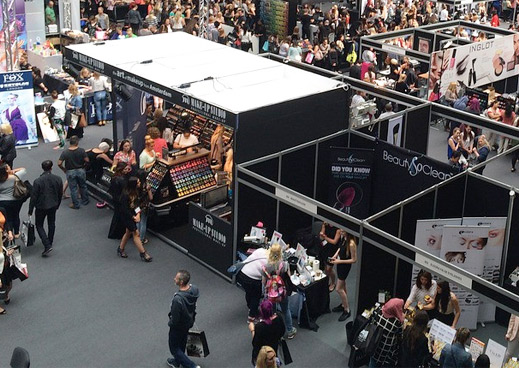 Trade shows have long been a mainstay across a spectrum of businesses, professional fields and industries. Composing a list of the almost innumerable benefits would include the fact that well over 90% of attendees went to see new products. Another would be that 71% of small- and medium-sized enterprises garnered new business through trade show face-to-face networking.*

The use of the past tense above is intentional, since, as we all know, COVID-19 has changed everything. The pandemic has had a devastating affect on trade shows, in all their facets. In the photo at the head of this article, I am standing in the booth of an MVC client for whom we were managing a show (circa 2018); it’s amazing to think how things have changed in this last year.

In the late winter and spring of 2020, as restrictions began to filter into society, all types of public gatherings were cancelled, including trade shows. A number of significant shows across the world were either severely modified or called off altogether, often without a lot of notice. For instance, as reported by the BBC, the 2020 Mobile World Congress, which was to take place in Barcelona, Spain in late February, was cancelled. To say the show was a major event is an understatement: it represents mobile and cellular providers around the globe, including the likes of T-Mobile, Samsung, LG and a host of other equipment manufacturers and network providers. Past attendance at this show was the size of a city - 100,000 people.

While cancelled trade shows included behemoth worldwide operations such as cell services and the automobile industry, there were also countless numbers of retailers and other smaller industry sects which did not receive the benefits of participating.

The cancellations then ran the gamut downward, as more and more shows were nixed, to the smallest of regional or civic shows. There were many threads affected by this beyond the loss of the show itself—travel plans by attendees were likewise cancelled, along with unfathomable numbers of contracts and work that was supposed to support the shows, from local catering firms and restaurants to lodging and transportation services.

As the situation evolved, there were a small number of shows that were actually held, albeit with the expected social distancing and masking protocols. That did little to compensate, since many potential attendees either personally elected not to attend (understandably), or were prevented from doing so due to other restrictions. In short, it became a nightmarish mess and the shows that did proceed were sometimes characterized as much akin to ghost towns.

Some shows were able to quickly reformulate, and moved what content could be salvaged to online arenas. What was to be a keynote session became an online video presentation. What were to be informative round-tables became virtual webinars. These were indeed positive developments to be had when there were no other options.

The physical experience of visualizing and touching a new product in a booth is uniquely valuable...

It can be said, though, that these new modes simply cannot replace what happens at a “real” trade show, from the personal inspection and demonstrations of merchandise to the person-to-person business networking that inevitably takes place. The physical experience of visualizing and touching a new product in a booth is uniquely valuable (this is why you hand a visitor your new product so they can feel it, really examine it - tactile human interaction). For in-the-field salespeople, it's also the opportunity when both current and potential customers come to visit you instead of the other way around.

Pundits in the industry are optimistic that trade shows will resume as the pandemic eventually wanes. That is something to which we can all look forward. It is also worth mentioning that the evolution of new technologies to virtually deliver and participate in trade shows will likely continue. Trade shows will re-emerge, but with some new pathways. Ultimately, this should lead to more participation, as at least a portion of attendees will participate virtually.

Of course, humans are highly social creatures, and the in-person experience and person-to-person connections trade shows provide cannot be underestimated. That said, we all know too well that when circumstances demand, we must adapt. It will most likely be that, as the pandemic finally resolves, in-person trade show attendance will be the best experience, but not the only one.

A very good resource any business or organization can take advantage of is a subscription to EXHIBITOR magazine. The printed and online issues brim with the latest trends, tips on best practices, reviews on exhibition equipment, and where to find all kinds of support.

The publication speaks easily to both individuals charged with their company’s exhibition plans, and to professionals who work in the trade show industry. There’s no cost to subscribe, so it’s readily available to anyone interested.

One thing is certain: the value of trade shows has not changed over the last year, nor has the need for them. In some ways, they are more important now than ever. Businesses and organizations can now consider and make plans for how to take advantage of these events in the future.

MVC has deep experience in client trade show management, and we are always glad to dialogue with you about what to expect and strategies to put your business “back in the flow.” Feel free to contact us at anytime.

GNOSIS™ is MVC's blog featuring a variety of insightful articles and news items of interest.

Have a topic you'd like us to research or have a suggestion? Feel free to contact us—we would be glad to hear from you.